“Ligh upon Light” is an exquisite and unique piece of art containing quotes from the Noble Quran that shed light on some of the many humanist values Islam promotes, translated into five languages. This book is a of paramount importance seeing as it comes to life in this critical stage of our age, where the dialogue of cultures and civilisations is fast becoming an absolute necessity that human instincts, its inquisitive and communicative nature, not only needs but thirsts for, and that the rapid pace of changes to the face of our world imposes today. Needless to say that an open dialogue is not a simple mind exercice but a noble calling that enables humanity to interact, communicate and co-exist in peace and harmony.

The importance of “Light upon Light” becomes clear when we realise that Islam’s future challenges lie in introducing its humanist character that runs deep in its roots, history and traditions to those who don’ know the real Islam, that is because the heart of the islamic civilisation is in its values and acceptance of the multicultural identity.  This must be our inspiration, and this is our role, our message to the people of te earth.

Taking its cues from the islamic art style, that was and remains still, as art history will attest, the embassador of the islamic civilisation to the world throughout the ages,  this book uses gorgeous miniatures and beautiful caligraphy to bring the secrets of the quranic verses to life. Mixing art with the spiritual values within the book brings the effects they have on the mind, soul and spirit of the reader to higher levels.

Humanist and universal values, Drawn from the Holy Book visually transcribed by the artists through illumination and calligraphy, so as to emphasize their letter and spirit.

High quality-making, matching the quality of the content. Printed in France by Colorgang, and composed by Prestel, German publisher specialized in works of art.

A limited edition, the illuminations are printed in a large square format (325× 325) on a heavyweight coated matte paper (200gr/m2); and presented as triptychs in a gift box. The illuminations’ original layout allows their framing and transformation into beautiful paintings.

The triptychs, original creations, made of

66 illuminations created for the occasion by Ahlam B.Gardner, a Syrian-Algerian painter who lived in England, Belgium and Cairo before settling in Paris. From this rich mixture of cultures, and the fusion between Mashreq, Maghreb and the West, Ahlam B. Gardner created an inimitable personal style that permeates in her illuminations.

31 calligraphies of Koranic verses – Maghrebi style- created by the Moroccan artist Noureddine Daifallah, who brilliantly exploits new painting techniques, Andalusian touches and the flexibility of the Arabic calligraphy in order to, as he said himself, “turn writing into painting”. Translation into five languages -English, French, Spanish, German, and Italian- of 31 koranic verses referring to the universal values embedded in the Holy Quran.

Poetry and spiritually filled texts  to introduce and reveal the essence of this work by the French poet and writer Jean-Pierre Faye, and  by Malika Bouabdellah, art historian who comments and celebrates the delicate work of illuminations, unveiling the mysteries of this very ancient art. 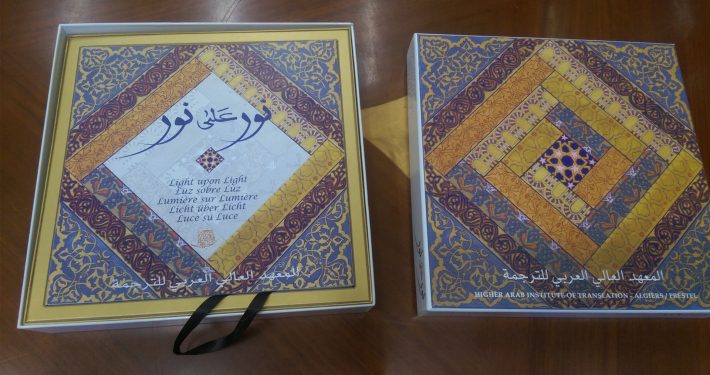 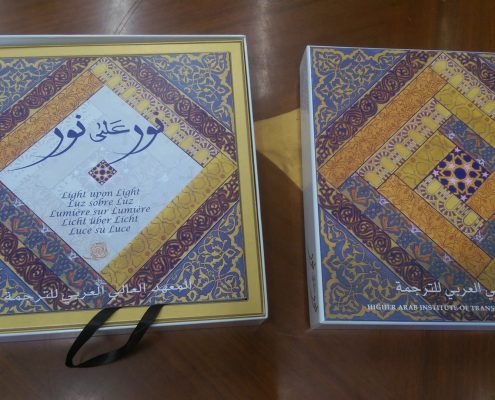 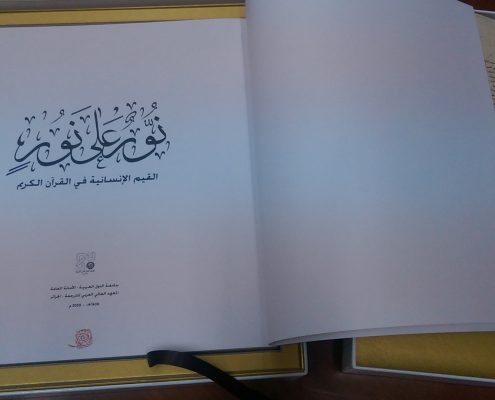 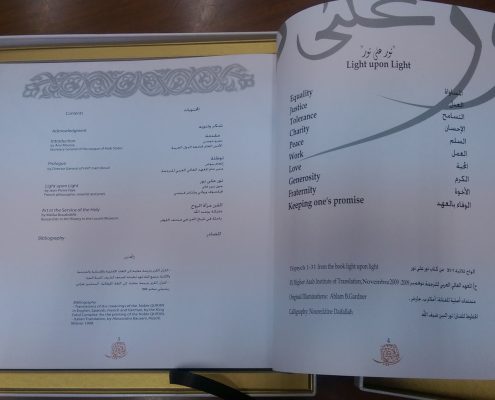 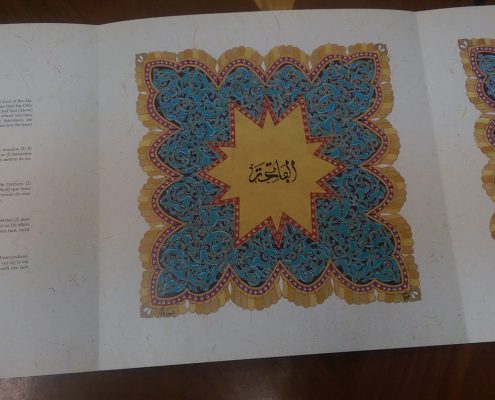 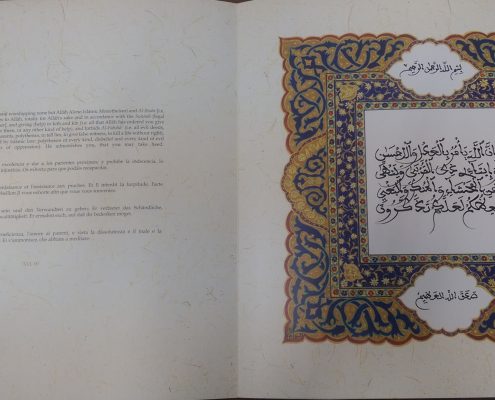 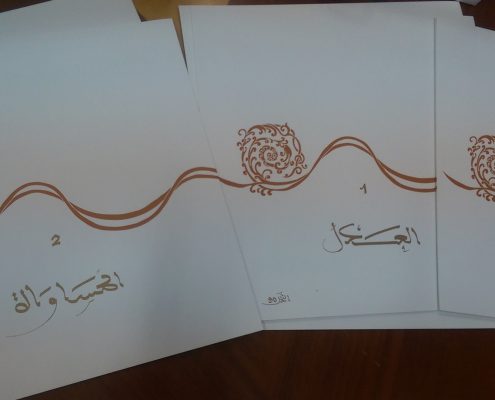 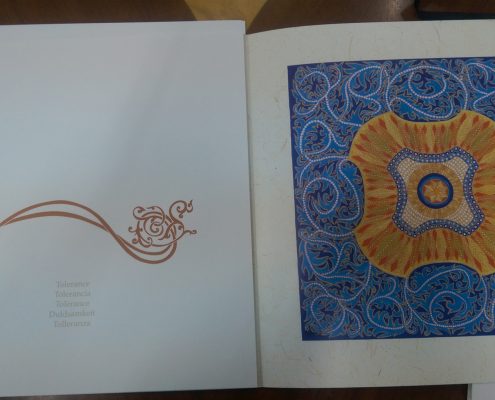 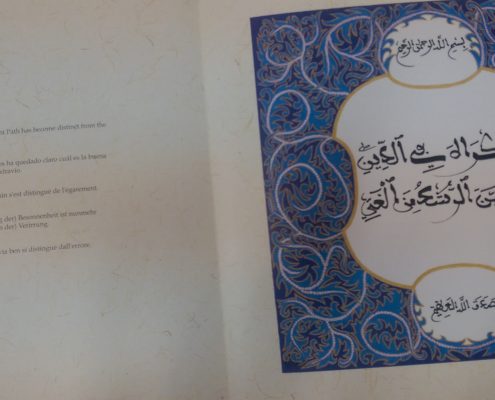 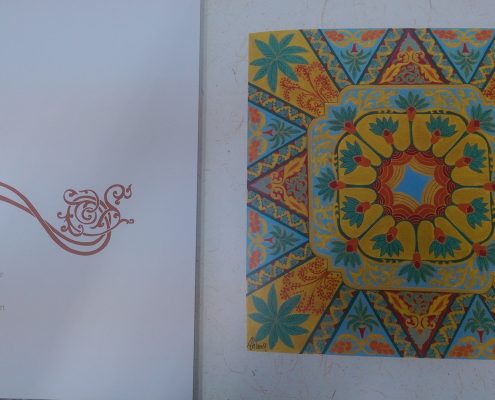 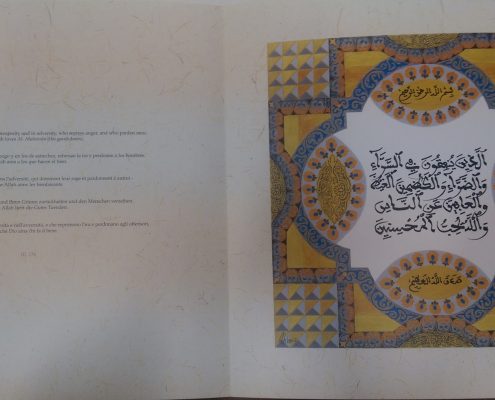 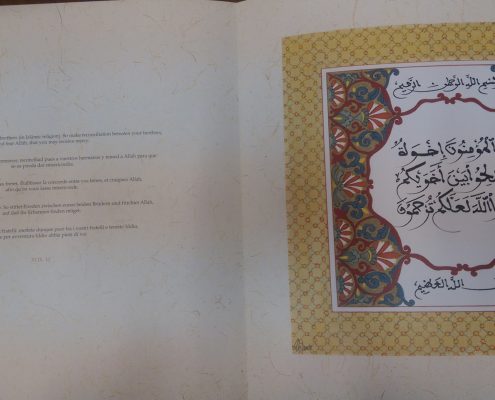